Michelle Betham -
Romance, with a kick!
Get in touch through Facebook, Twitter or email - I'd love to hear from you! 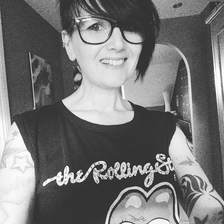 I'm an ex-media technician turned author of romance ranging from the sweet to the sexy; dark and gritty to beach-read bonkbusters, usually involving rock stars, DJs, sports stars, hot businessmen, and bad-boy bikers. But not usually all in the same book. Yet. I'm predominantly self-published but I also have six books published through One More Chapter, a division of HarperCollins UK, one of which is a romantic suspense thriller - The Wife - written under the name of ML Roberts.

Addicted to binge-watching TV shows I struggle to think of a life before Netflix or Amazon Prime, I'm a HUGE electronic dance music fan, I love tattoos – of which I have many – spicy food, superheroes (I'm a slightly obsessed Avengers fan-girl who harbours a particularly unhealthy obsession with Captain America), and Keanu Reeves – a crush that’s lasted well over twenty years, and one I blame entirely on ‘Point Break’. The original. I refuse to acknowledge any remake exists.

​My dream is to ride a Harley, visit Las Vegas, and be able to eat any amount of chocolate without putting on weight.

​I live in County Durham, north-east England, with my husband and West Highland Terrier, Opie - named after my favorite biker in Sons of Anarchy - where I can be found most days drinking tea and making up stories.

Create your own unique website with customizable templates.
Michelle Betham -
Romance, with a kick!